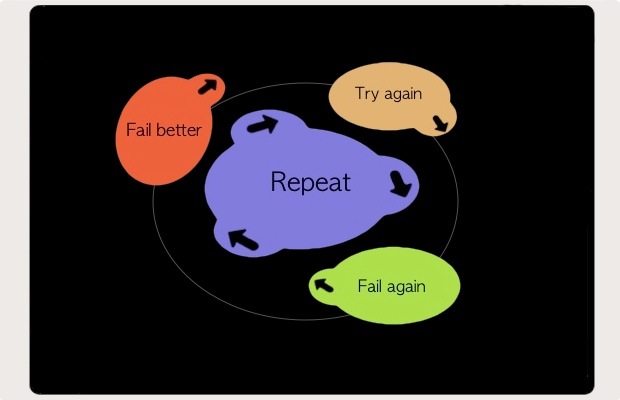 Do you know why celebrity newspapers focus on horrible divorces, missed boobs surgeries or actors blowing a fuse on drugs?
That’s because most people are hypnotized by failure. They like to watch others fail, secretly hoping not to come next.

They believe failing is a big deal, a point of no return.

I used to be like that 10 years ago: missing an objective would flatten my self-esteem, I would hide my defeat from others, eating at Mac Donald’s, wearing sunglasses and a fake beard not to be recognized.

With time I realized that screwing up is OK. It’s actually more than OK, it’s a power tool that crushes obstacles on the way to success and changes you for the best if you know how to handle it.

I put together 4 good reasons to dump your fear of failure  and move on no matter what :

“Reality is when you bump into things” – Jacques Lacan

Do you think you’re smart enough to know if a new idea will work in reality?

Let’s be honest: you’re not. Nobody is! And don’t think Powerpoint presentations or Brainstorming will help you predict the future of your business either.

The only way to assess a plan’s value is to try it live. It will either pass of fail, from there only you can go a step further.

And assuming you fail, don’t get depressed, you just got vital information on what doesn’t work.
Consulting firms sell prospective reports for millions of dollars. Failure gives you the real data free of charge, I call that a deal.

You’re thinking to publish a blog on HTML5?
Don’t wait years to do it, publish it, promote it and see what happens. If that’s a flop, you’ll know what NOT to do next time. Correct it as you go.

Failure is a healthy ground from which you can draw meaningful conclusions out of your own mistakes and become smart at what you do.

People living mediocre lives are terrorized by failure. They’d rather stay in the basement than face pain and shame so they don’t try anything new, and of course their destinies fulfill their wishes: they live a safe, underground existence.

However, if you have higher ambitions than just being a mole, then failure can do something for you.

The moment you decide to embrace failure, you’ve already set yourself apart from the mass.

It’s easy to understand why: everybody likes to succeed, but few are willing to pay the real price for it, which is to fail consistently until you reach your goal.

Are you willing to take the risk of not succeeding publicly ? :)

If yes, congratulate yourself, since that’s really all it takes.

When your girlfriend tells you about this schoolmate who became a famous doctor at 28, don’t you wish he got abducted by North Korean agents and sent to the Gulag for scientific experiments, for instance?

You’re not the only one to feel that way, at times. Successful people are not as attractive as it seems.

As a general rule, if you brag about your success publicly 80% of people will try to get rid of you.

On the other hand, tell about a failed date and everybody will sympathize and want more details.

Don’t believe that it’s because humans are mean, though.

We just need to feel normal, hearing about others’ flops reminds us that we’re not the only ones eating our daily share of humiliations.

So just in case you’re afraid to be rejected if you fail publicly: don’t worry, goofballs are usually appreciated while succesful businessmen are loathed in secret.

It’s now a widely accepted fact that Honey badgers don’t care. They get what they want and they scare the heck out of most other animals.
They don’t mind looking stupid or being hurt, and to make matter worse: their skin is extremely thick, just go ahead and bite them, they’ll laugh at you.

Don’t you want to be fierce as a honey badger?

Well, failure WILL give you the same padded armor. If you fail enough, your skin thickens and your psychology becomes gradually immune to discouragement. That helps you force your way through anything, but you also repel potential obstacles (humans, non-humans, anything).

So how about trying again, if you’ve just failed?

This is the critical moment: when you stand back up. It doesn’t matter how strong you fell on the ground.

I’m not going to claim I’m a honey badger, but it takes me some faith to write self-help articles in English when I’m French. I think a lot of my posts suck BTW, but I don’t care. I know I’ll improve and that I’ll succeed…

Do you still hesitate to take the messy path of “try, fail, do it again”?

Do you really believe you have a choice?

Most Successful people fail all the time: whether they’re Tiger Woods, Bill Gates or the Buddha. They miss 70% of what they do. If there was a way around failure, they would have taken it already.

They’ve reached high accomplishments mostly for one reason: they failed more than anybody else.