A friendly approach to anger management 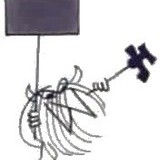 Angry people are not welcome anywhere, and nobody likes to be around them. Anger itself is such a horrible emotion to experience; it can ruin an entire day. There is something unacceptable about it. When I think of an angry person, I picture a crazy hobo swinging his fists as he fights imaginary enemies in the middle of the street—and of course, everyone is trying to avoid him. I always feel compassion for crazy people, which is probably why I tried to befriend my own anger as opposed to suppressing it. In the long run, I was able to verify that it was a healthy thing to do: befriending anger turns it into something else, and it’s kind of magic how soothing that is.

The following is a simple approach to anger management. It might not be the right approach for everyone, but it will help those who blow their fuse very easily.

Rule #1: When anger shows up, welcome it like a friend

When you realize you’re getting mad, visualize your anger like it’s a friend. A difficult friend. Act exactly as you would with a real friend who just discovered their partner cheated on them. Usually, when friends are in trouble you open your door to them, right? Be just as kind with your own anger. Don’t kick it out of your mind, since that “rejection reflex” creates more anger. Don’t let it outside in the cold, but instead invite it home. Now that you’ve made room for your anger, here’s a list of actions you might consider:

That’s the first thing to do in anger’s company: don’t do anything. Acting upon anger always leads to disaster. Go for a walk with anger at your side if you can.  Ideally, you should stay away from other people and postpone all your pending tasks. Don’t take any action. This rule is important—it’s not easy to apply, but it increases your inner strength and saves you from most of the problems caused by anger (smashed computers, spirited debates during professional meetings…).

If you’ve managed to apply Rules #1 and #2, then you’re ready for practicing mindfulness right now. Applying mindfulness in that situation means being completely aware of what’s going on inside of you. A good way to do that is to run a “body scan,” focusing on each area of your body one by one:

– Feel what’s happening in your guts.

– Check your facial muscles—are they tense as hell?

– Scan everything you want, head to toes.

This exercise might be challenging at first, since the physical symptoms associated with anger are generally unpleasant, but you’ll quickly see that it gives you relief. Also, by doing this you build up emotional strength and courage—the courage to experience raw emotions, which is a training that leads to real control of your mind.

Wrapped up: The more intimate you become with anger, the freer you are from it

We think nonsense when we’re angry, because anger is insane! That kind of emotion will talk you into gutting your boss and throwing your kids in the trashcan. I’m referring to the mind-chatter that runs through all your frustrations about everything, from the neighbor’s dog to paying your taxes.  If you get caught up in and believe in your frustration, then it continues to build up in your mind and degenerates into an apocalypse of hatred. So once again, just picture anger as this annoying friend and as the complaining goes on, don’t believe a word of what it says. Approach it with a sense of humor if you can…you’ll save yourself plenty of mental energy.

Wrapped up: When angry, don’t believe in what you’re thinking

One of the main advantages of visualizing anger as another person is that you don’t identify with it. You stop thinking it’s serious. Seeing anger from a distance will break its spell. Why not think of it as a puppet sitting on your shoulder? Why not call it  “asshole” or “gonzo,” for instance? Anything will do as long as it makes you aware that you’re dealing with a temporary emotion, something that is not real and not serious.

Wrapped up: Don’t take anger seriously, stick a red nose on its face

It feels quite terrible to have people watch you while you’re getting mad. You make a fool of yourself, talking the worst crap, being offensive and unfair, and then you regret it. But it’s too late.

The bad news is you can’t do anything about people judging you, even though the ones who judge you harshly usually have a problem with anger.

The good news is you don’t need them to feel fine even after being angry in public. Once again, you can imagine yourself consoling a friend that went mad as he heard he was fired, for example. Really, would you accuse him of losing his temper? So just apply the same policy to yourself, and be your own best friend. Others will follow magically: you don’t exude the same thing when you’ve accepted yourself (especially the worst part of yourself).

Wrapped up: Don’t be ashamed of being angry, be your own friend instead

To finish, I need to tell you that all the above is a VERY condensed version of various approaches, mostly derived from Buddhism. If you apply this “anger management in a nutshell,” I’m sure you will want to deepen your practice, and I’ll rejoice if you do :)