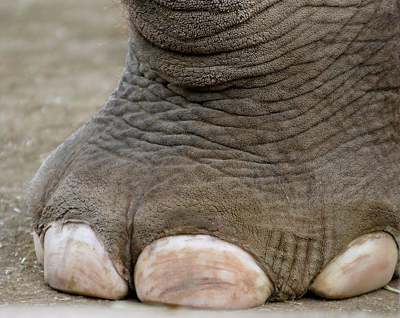 I’ve just spent a few days in a Buddhist retreat center with the coolest human beings on earth.

I’m calling them cool because these guys are nice to be around and also because making them mad is unbelievably difficult.
They take their cool everywhere with them, it’s floating around, you could almost touch it.

I’ve already tried to make these guys angry, just for the sake of challenging myself and I always failed miserably. 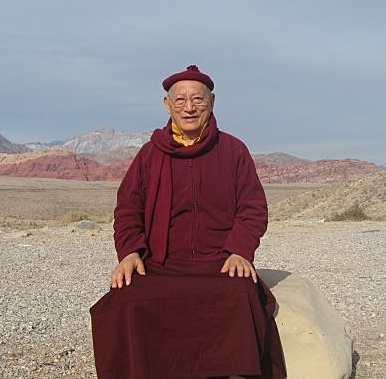 There’s Khenchen Rinpoche, 84 (although nobody’s too sure about his age), He’s a meditation master, and the type who’s so mentally stable that he would not budge if you pulled a machine-gun to his face.

I’ve actually lived close to him for two years and I NEVER saw him angry. Not even when I served him one of my experimental dishes (in my home town, people get killed for less than that).

Then there’s Phurba, Tibetan too, I witnessed him getting slightly upset once as he hung up on some dude, but the guy he was arguing with truly deserved to be executed with a chainsaw, so I’d say that Phurba handled the conflict with style.

There’s Daniel, who spends most of his time traveling around the world, as I’m writing he just got his main suitcase stolen in the train. So far he didn’t complain over his loss which includes several Teras of data and a lot of his video editing work.

When it comes to Hunter, his self-control makes me jealous, so I insidiously try to push him over the edge, but then he makes fun of me and I end up doubting my capacities to be a sore in the ass.

I find it pretty awesome to watch those four guys operate, they look so immune to the anxiety that plagues modern minds.

Although they come from various backgrounds, they have a few interesting things in common, let me summarize what they’re doing differently:

They don’t own much

Even the most extreme minimalistic Ayatollahs look like hoarders and hypocrites if I compare them to my friends.

Phurba owns a camera, a laptop and a few clothes. That’s it. Earlier in his life he crossed Tibet (a fairly large country by human standards) with next to nothing.

Daniel had two bags, but as I said earlier, he got the second one stolen, so now he’ll do with just one.

None of my buds appear to be in distress for not owning much. In fact, their happiness looks more genuine than the staged smiles of a life insurance commercial.

Simplicity seems to alleviate pressure, the equation is very simple: your stress level decreases as you get rid of more junk.

So far I praised my friends who chose frugality, but I also know people on the opposite side of the wealth spectrum: they own beautiful houses by the mediterranean sea or the French countryside and their lives are a tragic proof of how miserable and paranoid riches can make you. These folks complain non-stop about the astronomical cost of their properties maintenance and  their struggle with the fear of being taken advantage of.

My point is not to advocate poverty, I just believe that wealth and happiness have a shitty relationship and that they should divorce.

And the four friends I mentioned as example are not poor, two of them are Buddhist monks (their needs are covered by their spiritual organization) and the two others are successful freelancers. They just have enough.

Rolling in the present

When is that scam going to end?

When will we get it that the past and the future are mental constructs designed to hypnotize us into a vegetable state?

All that we’ll ever have is right now, either you get this idea right, or you sign a life-long commitment with anxiety. The outcome is pretty straightforward: those who understand how to enjoy the present moment spend a pretty darn good time on earth, the others are always busy scheduling a future that never happens while ignoring every minute they could actually experience.

I’m just like the majority of sleep-walkers, I always secretly hope tomorrow will be kinder with me than yesterday and less annoying than just now.
But I’m aware of the terrible cost of not enjoying the present while it’s there, so I exercise the power of now daily.

In this regard, I’m afraid the dudes I mentioned seem much more adjusted to the present. 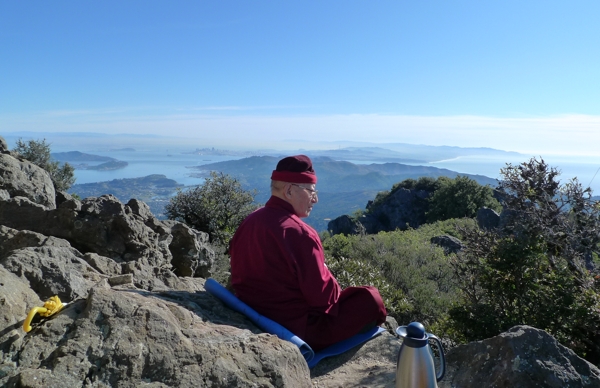 They’re not into death sports or hard drugs, instead they taught themselves how to be right here, right now which seems to keep anxiety at bay.

Now please be honest and just admit that altruism is a corny and boring concept, a bitter remedy that you hate. If you feel you like it then I’d bet you haven’t really tried yet.

Taking care of others is not popular, it’s never been exciting to be kind because I think we’re all hard-wired to not give a fig about our peers.

No wonder the spiritual figures who promoted selflessness have been misunderstood or ended on a cross somewhere in the desert.

Even the spiritual revival that’s happening today around meditation hardly mentions altruism, because the concept is such a turn-off, it makes sales plummet instantly. It’s like trying to convince the world to regain health by getting a daily enema, the majority would rather be sick.

But once again, the four men I mentioned above had no problem wrapping their heads around the importance of caring for others.

I’m not sure if they do it spontaneously or just because they’re Buddhist, but everytime I spend time with them, they’re ready to help and seem more interested in me than the average Joes I deal with in NYC.

I can’t resist sharing a picture of Khenchen Rinpoche feeding birds. He does it not because he likes it, but because he thinks that winter is tough on animals: 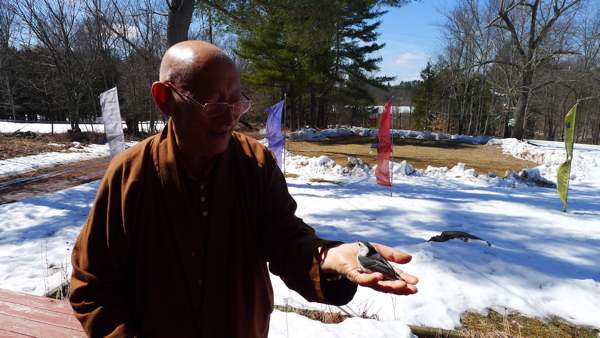 Owing less, living in the moment, helping others… Is that all I had to say? Yep. I know, it’s nothing new, but my hunch is that it’s the only way that truly works.

I  know that there are other more targeted methods: sleeping enough, a healthy diet and healthy relationships but articles about mental fitness tend to annoy me, and on top of that I know too many people who apply these superficial tricks without any results whatsoever.

There is no herbal supplement to treat anxiety, it’s a daily job, but looking at a few examples, It seems to be reachable.