A month ago I decided to stop having a day job and hit the road. This is NOT a success story, but a live experiment:
growing the roots of happiness
This episode: El Salvador, a dying man, a fish and MONEY…

El Salvador is my second stopover, I arrived from Guatemala by bus. Smooth ride.

There are no tourists in El Salvador.
No wonder since the country’s famous mainly for two things:
– A civil war
– Two super violent gangs (MS18 and Mara Salvatrucha)

I guess it’s enough to repel most travelers.
That’s too bad: this country and its people have a lot to offer, a lot more than touristic heavens like mine (France).

There are beautiful things to see there: 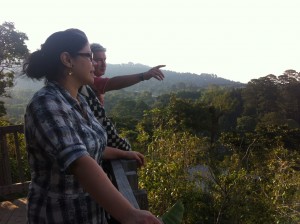 Volcanoes surrounded by multicolored vegetation
(including wild parrots in the trees).

That’s to name the little I saw in El Salvador.

And there’s the people, who make you feel like you belong there.
You can’t feel like a stranger in El Salvador, even if you don’t speak the language, 5 words of spanish should be enough for people to try and help you in the streets.

Salvadorans also seem to experience stress differently: they don’t.
I have no idea how they do it but as you watch people there you feel like depression is not part of their life, either.
If you let yourself go with the Salvadoran flow, chances are you might forget about sadness for a while.

That doesn’t mean there’s no suffering there, people just seem to manage it better.

And they don’t complain.

Death was central in my last post in Guatemala, unfortunately it decided to follow me in Salvador’s capital, the first step of my journey in this country.

My girlfriend Vilma and I stay at a friend’s: an old lady that lives with her husband.

The husband looks like a nice and warm person. Two days later we are informed that he’s just been admitted in intensive care for respiratory failure, he’s close to death.

We decide to pay him a visit, we are madly happy about spending vacation at the hospital, but we feel we have to contribute in some way.

They say they don’t know if he’s going to make it.

He’s in a cold, isolated room. I don’t recognize the man I first met, he’s more of a tweaking bug now, drowning in tubes and high tech medical devices.

His eyes are open, they don’t blink, they just contract, that gives him a scary expressoin. I’m thinking:
“Where the hell is his conscience right now?”
I speak a few words, the only answers come from the drones of vital signs monitors around him. It’s not a conversation I’m having with him, anyway, more with myself.
What do I feel, that close to someone that’s about to leave?
I’m not so scared, maybe because I’m not the one that’s going to die.

Vilma and I come to see him three times, he’s a Buddhist, so we meditate a bit by his bed. Each time we sense some relief, maybe more for us than for him. There’s no way to know.

And he won’t speak.

Vilma leaves me to go back to NYC, where she lives and has a job. I decide to stay for a month in a hotel by the sea.
The place is a surfer’s paradise: god has set wave machines everywhere along the shore.
I’m probably  the only dude here who doesn’t surf so I try learning it for a week, with mild success (I nearly swallowed my board, once). My conclusion is that I’m too lazy to put the effort.

Screw it.
I totally flake out of surfing :)

The next days I enjoy the beach, the sea, a hammock…
That’s awesome, even at night. Sometimes waves are fluorescent because of the “Red Tide” (an accumulation of plancton in the ocean). A hypnotic thing to watch.

These blissful days pass fast even though I work quite a lot (more on that below).

After several conversations with surfers, I realize that I feel closer to fish than to these people.

Surfers only care for themselves, they just want to have fun, they don’t pay attention to anything else. Fish are probably like that too, but at least they look funny.

And they won’t speak.

The Money: how do I manage a homeless budget? 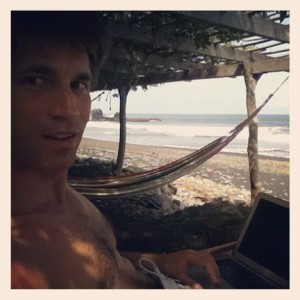 “I love your project to leave you day job and travel the world, but you’re not a student anymore, so
how do you make it financially?”

That’s what a lot of people tell me.

I’m happy to share how I do it, without hiding anything.

For the reminder: I decided not to have a day job anymore, gave back the keys of my appartment and I’ve been travelling for 2 months now.

It’s not a long vacation since I work as much as anyone. However, I’m free to go any place and I don’t pay a rent.

I basically switched from a sedentary to a nomadic lifestyle, in which I make money while I travel.

That pays for a cozy lifestyle, not a backpacker’s one. I’m actually more comfortable as a traveler than I was as a sedentary person.

My activities are currently:

– Sales in the IT industry:

I’m an independent sales person, that allows me to generate substantial income. Although irregular, that income is enough to fuel my trip and pay the taxes :)
Being a Sales person can allow someone to work remotely but that options needs to be earned. It took me  4 years stuck in a 9 to 5 job before my credibility was enough to work abroad, FYI.

I write the blog you’re just reading, it brings negligible financial value for now (this blog is 4 months old), but I expect it to be profitable within 6 months.

The transition to this nomadic lifestyle has been pure cash burn: I managed to do it  thanks to my savings (which are all gone now) and money lend by my mom (thanks mom :-) , needless to say I recommend to have a  minimal back up before jumping.

Regarding my current financial status, I’m now about to break even and will keep you posted as my income continues to increase :)

If you’re curious to know more on that choice, its benefits and limitations, please leave me a comment, I’ll be glad to respond.

I’d also be happy to stay in touch with you: