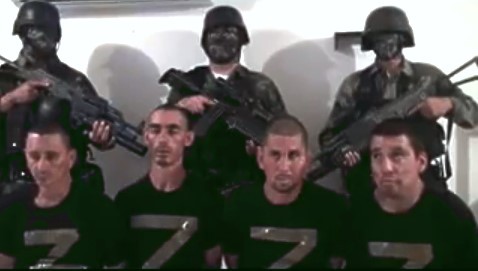 I saw an execution video a few months ago. Rebels from somewhere in the Middle-East had caught a dude from the enemy’s side. They laid him on the floor, bound his hands and feet, then they machine gunned him.

The result was gruesome, and when the “rebels” turned their backs on what was left of the guy, they looked somewhat awkward, not at ease with the aftermath.

I was not comfortable watching a murder on the internet, either.

Then yesterday I saw a documentary about drug cartels in Mexico. A gang member was asked if he ever tortured people. The guy reported that he did, he had actually clubbed someone to death once, confessing that he had to “work up his nerves to do it”, because if he showed signs of empathy, his bosses would conclude that he was no longer useful.

He couldn’t sleep for a week after that.

Browsing the records of human savagery, I found out that in every context were hurting a stranger is involved, an average person’s initial feeling is  reluctance (although this first reaction can turn to indifference and even enjoyment as exposure to violence recurs).

There’s no scientific explanation justifying empathy when it’s turned toward someone you don’t know, or an animal. Empathy defeats Darwinist theories (and embarrasses free-market advocates).

The only fields of human knowledge covering the area of empathy “for no apparent reason” are spirituality and philosophy.

In Buddhism, empathy’s listed as one of the basic mental factors under the code name Karuna, aka compassion.

There’s no immediate benefits of compassion, in fact, it can even be a hindrance to a corporate or political career. Yet it’s there, embedded in the human brain.

Maybe at some stage we’ll figure out why empathy was built-in our OS.  In the meantime, it could be regarded a safeguard for our sanity, I guess it’s good enough, right?