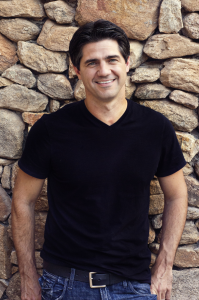 Today I’m extremely happy to invite Joshua Becker to talk a bit about minimalism. An author, a father and a Christian, Joshua decided to declutter his life a few years ago and focus on what really matters. His wife and him walked the path of minimalism far enough to share their experiences on Becoming Minimalist. In this interview, Joshua explains his choices, and how they could make sense for most of us.

Q: Was there a particular “aha” moment when you knew that you needed to quit the consumerist lifestyle and start simplifying everything? If yes, could you tell us about this godwin point?

A: The moment I knew something had to change involved a Saturday morning while cleaning out my garage. I can remember it quite vividly.

It was a Spring weekend and my family was living in Vermont. My wife and I decided to spend the weekend spring-cleaning the house. I volunteered to clean the garage to enjoy some of the sunshine hoping my son would help. However, my 5-year old had other plans—he wanted to play in the backyard.

As the morning unfolded, my son would run to the front of the house and ask me to play with him. And even as the hours passed, I kept telling him I couldn’t play because I had to clean and organize the stuff in our garage.

My neighbor, who happened to be outside at the time, was watching the interaction between us and the growing frustration on my shoulders. I began commenting to her about the amount of time and energy I had spent cleaning rather than being with my son. She responded by saying, “That’s why my daughter is a minimalist. She keeps telling me I don’t need to own all this stuff.”

I remember looking at the pile of dusty possessions in my driveway and then looking at my son alone in the backyard and realizing for the first time that all the things I own were not adding joy, purpose, or fulfillment into my life. Even worse, they were actually distracting me from the very thing that did bring joy, purpose, and meaning.

We decided right then to remove the excess stuff that we didn’t need so we could have more time and energy and money to focus on the most important things in life.

Q: If you were to summarize the benefits of simplicity in a few arguments, what would they be?

A: There are actually quite a number of benefits of owning less stuff—and I don’t think they are difficult for people to comprehend. When we own less, we have more time, more energy, more money, and more freedom. We have less stress, less clutter, and fewer distractions. Ultimately, we have more opportunity to pursue the things in life we are most passionate about. And even though those things will vary from one person to another, they always bring us more joy than owning a bunch of excess stuff.

Q: You’re extremely successful as an author and a blogger. With fame, wealth tends to increase (not a bad thing!), do you catch yourself dreaming of owning more?

A: No, never. I honestly have no desire to return to my old way of living. I am very content with less and would hate to return to a lifestyle of excess. Fortunately, I’m not nearly as famous or wealthy as you imply so the temptation is very little. And I take a very different view of wealth than most people—I think there are some inherent dangers in owning too much and it should not always be considered a good thing to have.

Q: What has been the impact of minimalism on your spirituality?

A: Minimalism has had a significant impact on my spirituality. But at the beginning, my spirituality impacted my minimalism. I grew up as a Christian and spent a number of years working in churches. I understood clearly what Jesus taught about money, possessions, and generosity. My pursuit of minimalism was certainly spurred on my upbringing.

But as I mentioned, soon, minimalism began impacting my spirituality as well. At the very least, removing the pursuit of material possessions allowed me to focus better on God and my spirituality. But more than that, minimalism forced me to dig deeper into my heart than ever before. It required me to ask questions about why I had been spending so much money and time on material things in the past—and my motivations behind my choices.

Q: Would you say that the emergence of minimalism and simplicity is a mere side-effect of the economic slow-down or the sign of a deeper transformation of society?

A: Minimalism/Simple Living is certainly not a new pursuit. It has been promoted and encouraged by spiritual leaders from every respected world religion from the beginning of time. But I am certainly noticing an increase in conversations about it and more people choosing to adopt the lifestyle. Certainly, the economy is a part of it and technology is making more and more possible. Environmental concerns also play a role.

So many of our recent generations have pursued happiness in material possessions for so many years. We are starting to realize that they didn’t find any real fulfillment there. As a result, we are beginning to look elsewhere. Thankfully so.

Q: How does becoming a minimalist contribute to protecting the environment?

A: In a variety of ways. Someone who intentionally chooses to own and consume less uses less resources on the front end and disposes of fewer on the back end. They help promote the idea of a sharing economy. And some minimalists who are driven and passionate about the sake of the environment are more freed to work for its benefit by unburdening their life with unnecessary possessions.

Q: Money wise, simplicity is obviously a smart choice. Do you have any advice on what to do with the budget that hasn’t been spent on unnecessary items?

A: If you need to pay down debt, start there. Debt is a burden and freeing yourself from it is always an important pursuit.

If you have a family, I would use some of the excess to travel and create memories. Exposing yourself and your children to new cultures and world views is entirely formative and life-changing.

I am not a fan of the thinking that says, “Let’s save up a whole bunch of money and retire early.” Properly understood, work is wonderful and beautiful and necessary. It is our opportunity to contribute to society and make it a better place for others. Getting out of it as soon as possible is not the greatest good for our life or for others (despite what the American Dream says). But living on less does provide opportunity to pursue work on our terms and I think that is wonderful.

Generosity is also important. It helps break the cycle of materialism in our lives. It reminds us how valuable our money can actually be. And brings far greater fulfillment than keeping it for ourselves or spending it on solely personal endeavors.

Q: Some of gr0wing readers are already minimalists, others are on their way and they’re seeking inspiration and connections. Do you recommend any hang-outs or forums where then can join the tribe?

A: There are a number of helpful blogs: Mnmlist, Zen Habits, The Minimalists, and Be More with Less, for example. Many of those sites have Facebook groups or Twitter feeds to help offer inspiration. There is also a Minimalist Google+ group that people might find helpful. Just about everywhere you look, you can find somebody talking about it.