Editor’s note: This is a guest post from Vilma Blanchemain – my wife.

In reading Gaël’s account about long distance relationships (our love story). I couldn’t help myself asking him if it was okay to post a response in the name of all those females that have asked me how we made it work for these 5 years. I want to share how I handled things on my end, so that both sides of the story could be shared. 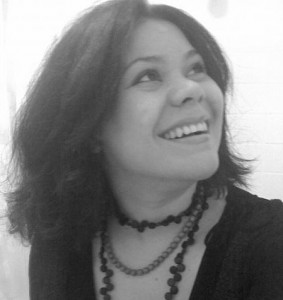 I am not a professional writer, nor a relationship expert and it is not my intention to brag about finding THE formula for eternal happiness. Here I present to you just a simple text; laying out over the table what has worked for us until now.

As with everything, things and people change. We are aware that we will have to continue debugging and re-establishing ourselves as a couple as situations and life events come our way.

I have had pretty shitty love experiences in the past and often felt as if I’d lost hope completely.
Being a true romantic at heart, I knew there was someone out there meaningful for me to love.
Before I could live any true love story, I knew clearly that I had to work on myself first and stop any kind of self-blame game or pity party. With time I started realizing that: output equals input.
I only received what I thought of myself and/or what I actually ‘gave out’ to the person in front of me. That was the first step, for me, to clear the Path. I had to do some mind and emotional gardening first, and after that, I was sure to find the way back to love.
I also committed myself to stay away from dissatisfying relationships and half-ass, hurting-in-silence situations. I was DONE with this.

When I met Gael the magic was instant for me. I knew immediately this was the guy I wanted to share a long time with.
I know it sounds absurd or even too sensationalist. Nevertheless, those who know me well can see that most of the time; I function on a visceral, instinctual basis.

Gael and I met in the most favorable of circumstances.
Him, a Buddhist monk and I, a Lay Buddhist practitioner, helping out as attendants to the same meditation master who we practiced with.
Our common goal was to learn and serve the Dharma. It was surely not favorable for my romantic expectations. Still, I decided I was going to learn to share my love in a different manner. Thus, connecting with him in this process in a more profound way.

For the next couple of years we became as close friends as we could get. In the meantime enjoying this connection, as we helped together in our meditation center.
During this time I kept my feelings in check. My intentions as to why I was his friend continually renewed just to keep it clean and honest. We did not expose our feelings to each other until after he was free of his vows and ready to move back to France and re-connect with his Lay Life.

This marked the beginning of our relationship.
We decided to start this new relationship despite the distance. I had the determination of a soldier that this was going to work out, or at least, I was going to make sure on my end to give it my best shot.

I am sharing a checklist that worked for me during this process. A series of things I asked myself and put into practice in our partnership:

In the past I had clearly ignored red flags or gut feelings when choosing men.
So, please check out the guy and ask yourself:

As I grew older, I understood the preciousness of time. There is not much time left to be wasted in denial or on complaining how bad he treats you. Rather than hear what he has to say, pay attention how YOU feel around him.

Be honest to yourself first.

Is this the guy I want, or am I only holding on to the “idea” of having a relationship because I don’t want to feel lonely?

Long distance relationships are great intimacy ‘camouflagers’. You can keep the illusion of being with someone, while at the same time not really having anything meaningful at all. Just the feeling of relief while telling your friends “I have a boyfriend”.
Lots of us tend to “stick it up” because we think it is better to be WITH someone, even if it’s half-assed; than to face loneliness or the pressure of not having someone special in your life. To me, I had thrown that conditioning out the window, way long before that. I was ready to ask myself those hard questions.

When establishing the basis of a relationship you need to be able to state what you want and need out of this union. This is a great filter, as it either gives you ground for the real work to come into play, or it gives the guy the signal to LEAVE.

Don’t be afraid to do it. At this early stage it is better to know if you are standing on mud or sitting on a nice comfortable cushion!
Express clearly to your partner what you want and what you don’t want out of the relationship.
This does not mean it is an opportunity to feed on your egocentric tendencies. It is more like a road map to the other person, to alert them of your sensitivities and limits. Having expectations is normal, as long as this has been agreed upon together. Having expectations and not communicating them makes the guy feel that: you not only want a significant other, but a mind reader!
Certainly for me this was a deal breaker, ESPECIALLY in a long distance relationship. To set the contract straight.

4-Analyze if the core values are the same

This is not easy when you don’t share the same physical space. However, through conversation and voicing postures on several topics, you can really get a feeling of someone’s essence. For example, I couldn’t live with a guy that treats animals cruelly or that is arrogant and dismissive towards other people.

Gaël and I spent lots of time analyzing each others’ reactions silently. Just because we were in love did not prevent us from using our critical thinking. Of course, being in the same spiritual path played in our favor.

Being a girl that was brought up in Latin America from a very traditional family, I was always raised to be a ‘pleaser’. Therefore it felt like my needs were not as important as the rest.
I learned to communicate.
This is a good quality that I still keep till this day, but not at the expense of losing myself in the process anymore.
Gaël, who comes from another cultural background, reassured me once and again that my feelings WERE valid. This proved to me that he was also invested in the relationship as much as I was.
I gradually became more vocal and open to share intimate details that we, girls, usually keep to ourselves. For example: Expressing when we’re feeling insecure, unhappy, disappointed, etc. Communication is not only talking about how the day went, but also to go deeper into our inner worlds and share what’s going on.

6-Dealing with ghosts in skirts

From a distance, this was the toughest part for me. Being around Gaël, I already had a taste of the attention he sometimes gets from other girls. I have to admit, this made me very nervous.

I decided to make it a point to clearly express to him when I was feeling jealous, BUT not in the way of drama. I simply stated to him what was going on in my head without acting out on my emotions. This made it emotionally economical and louder than any argument . Fortunately, he had the space in his mind to listen and not shut down.
He identified that it was more of an insight on how I was feeling rather than an accusation.
I decided which battles to pick and which ones to simply let go. I was determined not to waste the already-limited time on the phone that we had, in petty arguments. Instead, I wanted give him the best of me and focus on us, not on others.

When there was an issue that I couldn’t let go of, I would state it and move on. I wouldn’t bring back the same issue once we had already spoken about it. Jealousy also exposes areas of yourself that need work. I tried my best to make it meaningful for me instead of always being a threat.

When I had something that really bothered me, I would first dissect it on my own. See how much of it was my own fabrication or my own fears playing through my head. Once I would get an understanding of what I felt, I would then bring it to the table with a cool head. I have to say, this was the most challenging part of the distance issue.
I also learned that the rest are not so interested in respecting other people’s commitments. Therefore it is YOU and your OTHER partner who need to make it clear and meaningful. ‘Others’, will always be there.

It is good to keep a healthy social lifestyle.
We both kept active social lives and traveled with and without each other. This was particularly important for both of us. Keeping a sense of space and individuality is important. It also allowed me to meet other guys only to be re-assured that I had made the right choice with him. Often, Gael and I would call each other after we were both back from social events filled with appreciation for one another!

I hear people cringe to the idea of having their significant other left free to mingle. However, thankfully, in our case it made us even stronger.

8-Give importance to planning

Plan your visits together. We didn’t leave anything to ‘the universe’, so to speak.
We consciously planned together when we would see each other during the year; for how long, what we would do, where, etc.

Many people would argue that this is not living in the moment, but to us (or at least to me), it effectively cleared any anxieties. It allowed me to operate better and carry out my daily routine more confidently. Knowing that there was something in place that I didn’t need to take care of or think about anymore.

9-Focus on a vision

When we had gained momentum in our relationship, we then started the ‘building part’ of the process.
We would spend our time together asking ourselves the bigger questions that would allow us to envision ourselves in the future.

Thankfully, Gael is progressive enough to endure these kinds of questionings, as we did it as an exercise more than a task (we still do).
Share a vision that is meaningful to both partners. In our case, we have a deep desire to be able to help others and to use this connection to expand beyond the walls of our home.

While we were apart, we would:

Long distance relationships are not easy, but totally possible with the right match. Actually, any relationship set-up is possible as long as both involved share the same wishes, have open and clear communication, and have each other’s best interest at heart.