My 30th birthday was by far the worst I ever had, it took me 6 month to get over it.

I was still a Buddhist monk at the time, and I had gone to India and Nepal for a pilgrimage in the four holy places of Buddhism:

My group of pilgrims had convinced dozens of practitioners to donate money so that we could make offerings to the various poor monasteries and meditation masters we would meet there.

One day, during the pilgrimage, I took half of the total amount with me ($4000 in cash), I forgot to close my backpack and got all the money stolen.

Four thousand dollars of everybody’s hard-earned bucks were gone because of my mindlessness. Saying that I felt like a loser would be sweet understatement. Shame kept me silent for about two months after that. 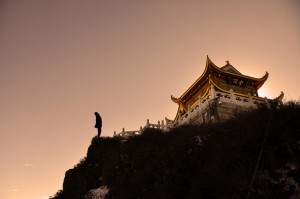 You can easily guess that my trip wasn’t the blast I had expected,given the humbling circumstances, but it was a blessing in disguise: it forced me to revisit everything I thought I knew about me. I took all the time I needed to investigate on guilt, self-esteem and how I treat myself.

Some say that only disastrous Buddhist pilgrimages are meaningful, in this regard, mine was a phenomenal success.

That experience took place more than 10 years ago now, it was a bit brutal but it gave me some insights on how to get over serious mistakes. Check it out, it might resonate well with your personality:

Meditation is one of the best medicine for the acute pain caused by a big failure.

Here’s how I use meditation to heal from a personal flop:

I sit on a pillow, watch my breathing and I offer my mind as much space as it needs. Then I invite all latent discomforts to manifest freely, shame is particularly welcome to show up.

A couple of minutes later, a huge wave of embarrassment will flood my brain, that’s a pretty good sign that mind is letting go of repressed feelings. For a little while, negative thoughts will seem more active than ever, but I normally let them be.

For instance: I’m used to thoughts like: “I’m an asshole coated with a layer of douchebag” to cross my mind, that’s fine, I let it be. I breathe into it with the certainty that it’s merely a ripple effect.

That 100% tolerance policy pays after a quick while: if negative emotions find no resistance, they leave the party.

Once the mind chatter loses momentum, I gain more clarity and I take action.

No wonder apologizing is one of the most universal social practice: it totally works.

If my screw-up affected other people, I try to apologize.

Everytime you acknowledge a fault and express your feeling of regret, you also prove to the person you hurt that you’re willing to go out of your way to save the relationship. To the point of exposing your weakness for a short while.

The one receiving an apology is well aware of the emotional cost of your gesture and generally responds by forgiveness, it’s almost an organic reaction.

I apologize as often as my pride allows me to, not only to repair relationships, but also because apologizing heals me, it’s like proclaiming that I became more intelligent, so much smarter that I can actually understand how I hurt someone. That kind of statement is good for self-esteem and it also rewards awareness, making it easier to improve in any condition.

You think you’re a nice guy until the day you make fun of a girl’s weird legs and she notices it. By the time you stop, the damage is done. OK, you were drunk, but you’ve just been a jerk and this “Nice Guy” thing now belongs to the trashcan.

Big mistakes dent the opinion we have on ourselves, that’s why they hurt so bad.

It happens to everybody because all the qualities we think we have (generosity, honesty, intelligence) are meant to be questioned by circumstances. We might be aware or not, but we screw up constantly and we rarely live up to our own standards.

That’s why mistakes are interesting, they expose the gap between what we think we are and our reality. Our part of the job is to integrate that information and make it a material for change.

When you screw up you’re faced with a choice:

Option #2 takes balls but it’s much easier than sustaining a lie. Even if it hurts, let’s admit it we’re not as smart as we think or at least not as tactful, I personally need wake up calls on a regular basis, failures play this part pretty well (if anyone can offer me a smoother method, please add a comment, thanks!)

Do you hold the belief that feeling guilty somewhat compensates for the mistakes you made, like a reimbursement kind of thing? I’m afraid no one’s going to get their money back, but you can be sure it will bite YOU. Some people actually end up killing themselves thinking that their death will wash away whatever harm they’ve done, most westerners have grown up to that type of delusional thinking.

I know that guilt is a pivotal notion to most religions, but I still think this emotional heritage is a useless bunch of medieval bullshit.

Being guilt free doesn’t make you evil: BTW, some Etnies like Tibetans don’t even know what the concept means. If you looked enough within yourself, your conclusion was probably that the only useful aspect of guilt is that you can get rid of it.

It’s a sticky belief, though, and it proliferates quickly, I made it a habit to kick it out of my mind as soon as it show up.

Here’s the red flags that indicate the presence of guilt:

Once you’ve identified the problem, you can start sand-blasting guilt using reprogrammation techniques:

Review all the causes of a mishap and you’ll see that many parameters where out of your control. Some tragic car accident happen because of a moment of inattention, combined with bad visibility and a weak set of breaks, how can you possibly attribute the responsibility to one single person? Stop thinking you’re the center of the world and go in peace.

Fire up disruptive emotions to break the self-pitying pattern of guilt: meet friends for drinks, workout, watch comedy shows. Engage in activities that are normally not compatible with sorrow and bereavement. You’ll be amazed how nice it is when people make you smile even if you don’t want to.

Talk to yourself as you would talk to your best friend. What would you tell your buddy if he came home devastated after he missed a hiring interview? Wouldn’t your cheer him up? Then why don’t you?

With that set of tools, you should have enough to start smashing guilt (it deserves it), share more techniques in the comments below if you have experimented with things that aren’t mentioned in this post!

I often wonder what took me so long to be able to deal with my own mistakes and start living guilt free. Maybe I needed that horrible pilgrimage to force me into a change?

Anyway, it was worth it. I’ll keep my knife to the grindstone, the job is not done yet.

Please spread this article if you liked it :)