The first time I heard about Blogging I found the idea laughable, “that’s a good hobby if you don’t have any life at all”, I thought.

Who has the time to publish vegan leek-pie recipes, reviews on the latest update of Grand Theft Auto or even worse: PERSONAL OPINIONS?

And who cares to read about that anyway?

I was very wrong, lots of people care about vegan recipes, primal scream or Finnish Metal to mention a few. I’m not any different BTW: I investigated on polyphasic sleep for days, what about that for a batshit nerd’s passion? At that time I wouldn’t have found anything online if it wasn’t for some bloggers who posted their experiences and offered methods to modify your sleep patterns. 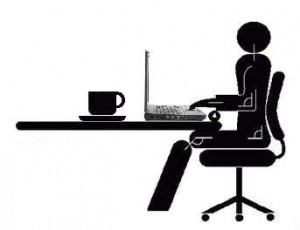 That was only a start, I continued to explore many other amazing sites and got more and more inspired by what I found, until I considered being a blogger. It’s been almost two years now and running my own site has done so much for me that I feel I should give you 5 reasons to do it too:

Time tends to accelerate, and like a wheel it picks up momentum. Slowly when you’re a child, then faster at youth. In your 30’s, the wheel spins like crazy and you start losing track of years and dreams and old friends. Quickly after the maelstrom, you die. Old people say that this process unfolds much faster than you would think.

Given that the bell will toll too early, you don’t want to end up realizing that you’ve spent your entire life postponing those great projects that scared you.

In case you forgot, your personal countdown has started, and already:

I might bore you to tears with my self-help lameness (I’m annoying myself too, BTW) yet I believe that life is wasted if you don’t live your dreams to the fullest, which implies guts and tons of persistence.

So how does blogging help with exterminating procrastination and half-assed commitments?

It’s a fantastic way to use your audience as a witness. Each time you decide to make a life changing decision, you can tell your readers. Once you make it publicly known that you’ve decided to stop injecting meth, for instance you hit the “publish” button and there is no coming back, everybody knows it and expects you to keep your word. You can’t fail, or you would totally embarass yourself. You don’t want that, your readers don’t want that, no one wants that.

That “accountability effect” has made a tremendous difference in me, in many cases Blogging plays the role of a power diary, it’s my companion, my confident, but also the coach that whips my butt to help me move on.

Yet that’s what most of us do everyday for hours on Facebook: and we do it for a corporation that owns our pics and insights and sells them to whoever’s willing to pay for our personal junk.

Let’s face it, we’re all blogging already, we just not doing it right. Instead of giving away your personal content to a fortune 500 company why not do it for yourself? In the end, you might even make it a source of income

Another great benefit of having your own blog is that it becomes your means of FREE expression: you can say whatever you damn well please, even if it breaks all conventions and threatens the interests of corporations and governments. Your Blog is YOUR thing, whether you’re a communist revolutionary or an illegal drug lover, you can still speak your mind.

By sharing what you’re really 100% passionate about, you’ll make genuine connections with other bloggers and readers that have the same interest: even if the niche is extremely narrow (like living with Rabbits indoor, for instance).

The internet offers this unique possibility to connect with people from every corner of the world and let them exchange info about amazingly narrow topics, stuff that interests 0,0021% of the world’s population. In the pre-internet world, that was impossible (even now, try to go to a bar and engage a conversation with a stranger about perma-culture in Eritrea, for example).

From the professional perspective, it’s an immense opportunity to connect with strangers that are interested in the very same field : there are so many niches where you can quickly become an authority and land a job…If you start early enough.

If you’re looking for a position, write a blog about what you can do, and connect with professionals and amateurs. It puts you far ahead in the job-hunting race.

FYI resumes are dead, anyway, they build up dust on the HR desks, until they’re thrown in the shredder. They’re also a particularly dishonest convention in which everybody tries to pretend they’re the perfect cogs for the job description, when they’re only desperate to pay the rent. And the process of matching Resumes with job offers must be repeated hundreds of time with a fluke chance to get attention. Speaking of being unproductive…

Seriously, I wonder when that CV joke is going to be officially ended, because in reality, it’s already gone.

You’re better off giving away your knowledge in a personal website, whether in the IT, music, or fooding area. If you don’t want to bother having your own blog, at least post an appealing profile in professional networks. I personally landed far more hiring interview via my LinkedIn account than by sending Resumes.

This is for the spiritual part of you, I know you have one, don’t be shy :)
As I (loudly) said in the beginning of this post: we’ll all die, maybe not right now, but soon enough to worry. Before biting the dust there’s a range of activities to relieve our anxiety: making tons of money, smooching our genitals against someone else’s, checking our FB notifications or start a holy war.
All these projects might keep their appeal for a while, but at some stage we’ll have to face their shallow nature (that’s if we’re fortunate enough to have a glimpse of lucidity before meeting with our creator).

Leaving a legacy is probably one of the only thing there’s no way to regret on your death bed. Offering value for everybody to enjoy, whether it’s in the form of art, technical expertise or simply cheering others up, is meaningful and deeply comforting for the soul. That’s how it feels for me, at least. Once again, Blogging is a way to do that on a microscopic budget…

Oh, yeah, and there is this 6th point that I didn’t seriously mention: making money with your blog. I guess I’ll brag about it once I actually make some :)

If you found this post useful, if you think it can motivate others, please share it with those who matter to you.