During my short stay on earth I’ve done many things that I did not like: going to school, watering down my ethics in order to get a job, attempting to fit in the status quo…

It wasn’t really cool, and more often than not I wondered if there was more to life than struggling to adjust to it.

Fortunately, the big picture of my existence brightened up when I found something that I could accomplish effortlessly, with great enthusiasm, I even dare to say with extraordinary diligence: getting high on drugs. 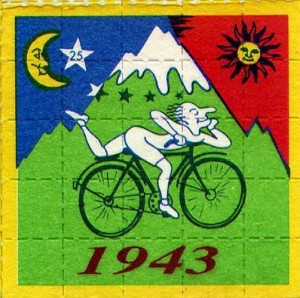 LSD was my main playground for a good 3 years, along with ecstasy and other neuro-blending supplements.
I won’t deny that psychedelics helped me make sense out of many areas in my life and that the magic held for a while but I scared myself at some stage: I had reached this critical point when I had to increase the dosage to reach the same excitement. I should add that lots of my friends landed in psychiatric wards, which sensibly curbed my juvenile enthusiasm for experiments.

After this realization a natural defense mechanism took over and I decided to stop cold turkey and to replace chemical highs with natural ones. That’s when I received my first trainings in meditation and became a Buddhist (eventually a monk).

It’s amazing how many people went through the very same sequence before turning to Eastern spiritualities: questioning everything, then getting high and in the end continuing the exploration using ancient mind-body techniques.

I’ve often asked to qualified teachers: what’s the status of drugs in Tibetan Buddhism?
Drugs seem to have opened the spiritual path for so many people, do they help with meditation?

I’m going to wrap up the answers quickly, to help those who wonder if drugs and Buddhism are compatible:

That’s the short answer of Tibetan Buddhism. Drugs damage the body, they distract the mind and are a serious hindrance to meditation.

Some hold the belief that drugs trigger higher states of consciousness but from the Buddhist perspective a mind on drugs is just experiencing chemically induced delusional states, as opposed to the its experience when sober which is also a confused one, but curable.

In short: drugs don’t really open your eyes, they just make you high.

Heating your fireplace with $100 bills

Some Buddhist teachers such as Ole Nydhal define drugs as activators that burn out your favorable karma and leave you completely broke (Quick reminder: Karma is what allows the positive and negative experiences to take place).

Here’s how the process is described: drug would force the release of positive karma immediately, allowing the manifestation of rewarding experiences for the user. The problem is that positive credit is blown way too fast, a bit like in a casino. The results can be seen after a while with drug addicts desperately trying to revive the initial bliss using colossal amounts of dope (only to get mediocre results), supposedly, they ran out of good karma, all that’s left to them is dope. And addiction.

Everybody knows how drug abuse can ruin the brain and internal organs, that area is well covered by modern medicine. But Tibetan Buddhism has a branch that addresses the “subtle body”, its tenets are very close to acupuncture and Ayurveda.

According to Tibetan masters teaching in this field, drugs do serious damage to the energetic part of the body. The consequences can be terrifying for mental and physical health, and they affect drugs users for the long haul.

The following will make skepticals laugh, the others will take it seriously. According to some teachings that remained hidden until recently, drugs have been originated by non-human beings with the sole intention of hurting them and preventing their spiritual progress.

That’s it. Yet another unsexy article… I’m sorry for those looking for more uplifting information but I felt compeled to put this online as there’s a lot of misunderstanding regarding this particular aspect of Buddhism and I guess anyone should make informed decisions..

The points above are a compilation of what I’ve heard in Tibetan Buddhist circles, I don’t know about the other schools and the historical Buddha never taught anything about drugs since they seemed to be nearly inexistent in ancient India. The teachings refering to drugs were given after the Buddha passed away by more recent accomplished teachers.

For those of you who wonder if I personally think that drugs are bad, I’d say that I’m still mildly convinced, particularly as quite a few civilization seem to have put psychedelics at the heart of their spiritual practice.

I’m not sure what to think, but if you’re willing to share your insights, please don’t be selfish: share them in the comments below.