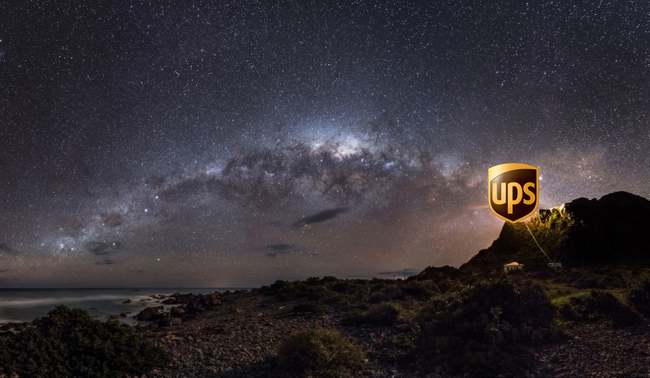 I didn’t expect that.

The Alien messenger didn’t look like a reptile or a heap of slime with a red bulging eye, as a matter of fact, he was disguised as a black UPS delivery guy. Not a bad choice for a costume. He looked real and handsome, if it wasn’t for the bluish reflections in his pupils.

The aliens were stealth, and smart: these guys had managed to put the human race under close scrutiny for over 60 years without ever being noticed. After that observation period they had decided not to make any official contact, and leave soon after.

They probably came to the conclusion that we were trouble. Or not worth it. I can totally relate.

Maybe it was a blooper on their end, but they eventually decided to let at least one human know the truth, so he could spread their message, later. The person in charge of that historic mission was me. I suspect I had been chosen because of my modest situation, a jobless immigrant at the time. I was so broke and isolated I didn’t even know what journalist to call, so their anonymity was secured.

I had organized the meeting with him at a cafe, an alternative place in the East Village, less crowded than a Starbucks and without the lame/depressing music. Coffee was all I could afford for both of us, really.

We sat by a window, next to us was a bearded hipster sharing details about his latest date with an asian girl, his voice was metallic and exuded self-importance. I felt an urge to kick him in the shin, but I kept quiet for fear of looking bad, and it was too late to change table, anyway.
I decided to focus on my visitor from space, who started talking right away:

“I can only talk for twenty minutes, and I won’t answer your questions, so just listen.”

– Fair enough, I said. I have nothing to ask. You guys were the ones curious about us, after all.

He smiled, despite his bluntness, there was something pleasant about him, no hostility or weirdness in his manners. He behaved like a guy who knew humans, it was almost as if he even knew me personally. I didn’t really know how to reciprocate.

“Don’t think that there’s a lot going on in outer space, we toured about four thousand galaxies, and we merely spotted twenty three inhabited areas. It’s pretty boring and desertic out there.

The exploratory mission has not been a complete failure, though:  we did find lifeforms, but most of them are shapeless, and they don’t think. I guess you guys would call them lichens.

I can’t believe the kind of money we spent in that scientific program, we travelled billions of light years just to inventory seventeen different kinds of fucking space lettuce.

Although most discoveries were a disappointment I must say that you humans were an exception worth checking out.”

I was curious, but also a bit apprehensive.

– Was it because of our technology?

He exploded into laughter, then quickly regained seriousness.

You humans shouldn’t embarrass yourself talking technology. And please don’t bother mentioning your physical shape, there’s nothing to brag about either. I’ve just sent a selfie of me in a human costume, can’t wait for the comments.

Seriously, there is only one single thing that we noticed about you, but it’s pretty unbelievable. We thought we were the only ones having it in the entire universe.”

– What is that, sexual reproduction?

“Man, we have six minutes left, focus, please.” (to my disappointment, he didn’t share any details about how they do it in outer space).

“You guys can think that you think. That’s a huge deal, we haven’t seen that anywhere else”

“Your species has the power to observe its own consciousness, which is  completely unheard of even by civilizations way ahead of you technically”

He paused and looked into my eyes for what felt like a minute, then he glanced through the window, he seemed ready to leave. I didn’t get what he was talking about, and I felt disappointingly stupid.

– I don’t see how how this consciousness thing is supposed to be so important. I thought Monsanto and the federal reserve were more urgent problems to solve, would you care to elaborate?

“Look, all your problems have one source: your mind. Once you get that, you can forget about Monsanto, the Illuminati and all that horseshit.
What I’m talking is about understanding your mind, not some kind of conspiracy. Your mind holds the source of everything, problems and solutions altogether. We’ve seen encouraging signs of interests for introspection among you, lately.

– Oh yeah, it’s true that meditation is gaining traction now, I’ve heard they’re even doing it at Google to boost creativity in their design department.

“Who gives a crap about what Hi-Tech does to “boost creativity”? Do you seriously think their toys are going to change anything for you guys? Are people any smarter with a smart device in their hands?

Why would you want to communicate faster anyway? To say what? Trust me, we’ve been there long before you. Technology is toxic for the immature brain.

– Well, sure, you Aliens are so spoiled with scientific achievements, pretty easy to mock technology when you can travel across space and dominate the universe.

“We don’t care about dominating the freaking creation anymore, we don’t even care to be recognized, do you think I give a fig about shaking Obama’s hand? That’s not what brought us here in the first place. We care about understanding things, and you guys just have the capacity to explore the only thing worth knowing anything about: your mind.”

– OK, where should I start, then? How should I harness this “transcendental power”?

“Who’s you? Who’s thinking that? Where is the one who thinks? In your head?”

– Of course it’s in my head, where else?

The Alien kept staring at me, with a gentle smile. His expression was amused, but he wouldn’t take his eyes off mine.

I was pulled out of my meditation by the bearded imbecile at the other table, he was talking louder than ever, now the conversation was about how Mac OS 10.8 was going to change the graphic design industry forever.

I turned and asked him to shut up, but he didn’t hear me.

As I turned back, the visitor from another planet was gone, his coffee still  on the table.