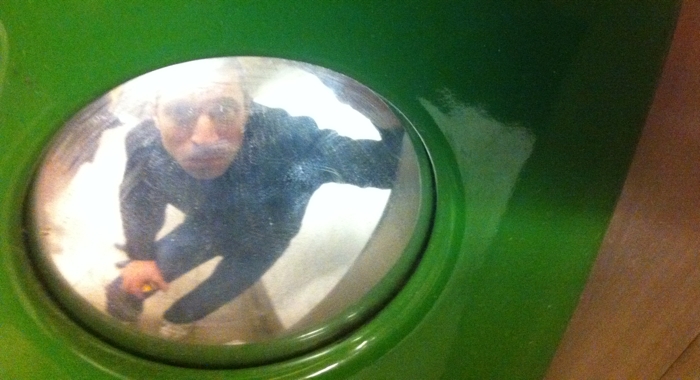 It’s around 1 am and I’m up for a beer or two. At this time CVS is the only store where I can find alcohol. I don’t like to give money to those aseptic businesses opened 24/7, not sure why, maybe is it the cameras?

Walking in the aisles I try to focus on BEERS and forget about being watched for a moment but I keep noticing the digital eyes sticking-out of the ceiling (I’m 6.4, therefore closer to the roof than an average customer).
Those dome-shaped devices are not only in the store, they’re out on the streets walls as well, staring at city-humans with a cool, spider’s gaze. And like bugs they multiply by the day, feeding the internet with live footage of street violence.

Why do I get so annoyed? We’re in 2013 after all, police states were prophetized long ago by George Orwell’s 1984.
And indeed those who chanced to read his dystopian novel have probably noticed that our daily reality’s getting disturbingly similar to his predictions:

That’s already serious enough, yet Orwell couldn’t imagine that everyone would also become a guinea pig in the global surveillance programs by sharing personal information on the Internet and via mobile phones.

I’d like to think that the western governments are now spying on their own citizens as a temporary measure to fight terrorism but I don’t want to fool myself either: if all of that suddenly happened without us being asked, why would it stop?

And what if western countries fell in the hands of brutal regimes? It’s easy to imagine how they would leverage opportunities such as PRISM surveillance program, right? (I can sense you’re looking at me like I’m a libertarian fanatic, but since I went that far, let me finish).

Now there’s a growing number of people concerned by being under constant scrutiny, but they feel powerless given the complexity of the infrastructure used to watch citizen.

You might be one of those worried tax-payers. If not, the rest of this article will be a waste of your time (you’ll still be watched, though, just read this before you leave).

For those who care to remain as free as possible, let me share the habits I’ve decided to apply. They’ll be limited to how I’ll use my cell phone and the Internet, but I’ve been working in the IT for quite a few years and I believe it’s a good place to start:

A good part of the data collected about us comes from the tools we use: Internet being one. You probably know that Google’s main business is to collect data on about your age, activities and interests. That information is supposed to remain anonymous and used only to display the right ads in your browser. In reality though, Google shares it with governments.

To work around that, you might want to use alternative search engines like Duck Duck Go which usage has exploded in recent months after the leaks regarding the NSA’s activity. Duck Duck Go’s fast as Google and their founders claim they’re commited not to share or collect your navigation data.

2- Choosing a Browser that works for YOU

Another personal data-hub is your web browser: it’s linked to a digital code called “IP address“. The IP address makes it quite easy to locate and identify you. If you wish to surf anonymously, the best current practice is to use the Tor Network, a technology that masks your IP address. Be aware that using Tor doesn’t mean that you’re a child-porn addict or a drug dealer. It’s a tool, not a ring…And it’s for free.

Cell phones are insanely useful but they’re doubled edged swords: every great smart phone functionality is a means for a third-party to collect your personal data:

I come from the industry of mobile application development and I can confirm that there’s no serious regulation taking place in this area, plus, most mobile phones are a disaster in terms of security, so I’m considering a crappy bare-bones phone as a replacement for my iPhone.
It’ll come in handy to spend less time online and reduce my bills and my traceability.

It’ll sound obvious for some but it’s easy to forget sometimes: everything we share on social websites should be considered public. Here’s how this premise changes the way I use social site: if I want to “share” something on Facebook, I use this little screening test:

I mean: scatological comments and other pics of me wasted on a bench…Would it be OK to let all these people see that?
Because really, that’s what it means to post something on Facebook, and there’s nothing wrong with it as long as I’m aware of the consequences.
I’ve also registered an account on Diaspora, a non-profit social platform built as an alternative to Facebook.

The Cloud is marketing jargon for any form of data hosted remotely (not on your computer). Concretely, it means that you don’t know where your information is hosted. Sometimes even your service company doesn’t know.

What level of privacy can you expect from those businesses? In reality: none.

On my end, I decided to gradually cut down on cloud services: iCloud, Dropbox and the likes. I’ll replace them with good old reliable external drives.

The convenience of paying with a credit card comes at a cost: every payment is tagged with your name, time and place of purchase. Paypal and other payment alternatives are just as tracked as Visa. To ensure more anonymity, Bitcoin can be a solution for online purchases, but I believe it’ll be more and more controlled as well.

In any case, cash has always been the safest method if you want your business to remain yours: cash is anonymous and convenient, if you can still count…

The best way to gain awareness on digital best practices and protection of freedom is by diversifying our sources of information. Mainstream media have been relaying inconvenient truths regarding the digital space so far, but to get the straight dope I’d recommend to follow human right activists, not dehumanized silicon valley entrepreneurs emulating Steve Jobs. 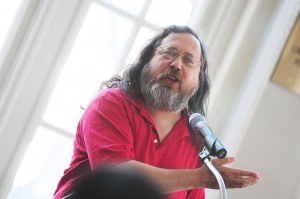 I recently attended a conference given by the historical leader of digital freedom: Richard Stallman thanks to my buddy and intellectual mentor Sebastien Sarrazin. Stallman’s message on the 4 fundamental digital freedoms might come across as extremist ideology, but if you really look it’s just common sense applied to computers and it’s about you, not a community of nerds.

Another interesting thought leader is Corne Ross, who’s released the Leaderless Revolution, a manifesto for self-government. I completely agree with his latest article on how we should get our privacy back.

Film maker Adam Curtis is also worth being listened to and watched, his documentary “All Watched Over by Machines of Loving Grace” is terrifying, funny and empowering in the same time. It clearly explains how we blindly trusted the computers era to act in everyone’s favor when it’s actually benefiting a happy few (from the economic perspective).

OK, that post is too long, it’s 2 am and I should have stopped writing long ago.

Did I turn you off with all those warning messages?