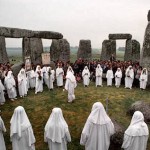 Having quality relationships with others is a key to happiness for most humans. Aside from ascetics, most of us need to have contact with each other. Being a social animal, I’ve learned to make connections in many countries and contexts, and with all types of people. I eventually wrote down what I believe are the basic rules for making friends with strangers. The following how-to list has efficient tips to start meaningful connections with people in social situations. These tips are not for the squeamish—I call them “quick and dirty” since they will allow you to engage faster with a lot of people, but you have to be ready to experience rejection at times…that’s the dirty part.

Networking in a party is simpler than it looks.

When you view a party from a certain distance, do you sometimes feel like everybody knows each other and that you don’t belong? This is a common illusion. In reality you don’t need to be someone special to be accepted by the crew; all you need is to pay discreet attention to each person and show that you’re available to meet them. I realize this sounds basic, but if you really take a good look, you’ll see that most people fail at applying this skill. So the theory is just that: being available and paying attention to people.

Ok, now, here’s what you can do once you’re at the party:

– Give them a chance

Assume that people came to the party to meet you, even if they don’t know you yet. Just keep that thought in mind and be available for people. It’ll give you the right mindset—to be available but not needy. You don’t have to be proactive (looking desperate for friends is not a good idea), but in many cases introducing yourself is just a way to give people a chance. Taking the first step and saying your name simply shows that you’re available for a new connection. And if you find it hard to enter somebody else’s space, remember that everybody came there to meet other people—otherwise they would have stayed home. Why not be the first person they meet that night?

In a social event everybody is afraid to look stupid. Nobody wants to start a conversation and ask questions even when they are dying to know about each other. If you assume that responsibility of being innocent, you save others from that pain and everybody likes you. How to do that? Simply be the one who asks questions. People will give you plenty of information about themselves if you just ask. They will also be delighted to talk about what they know best, as it makes them feel appreciated. Being innocent = being curious… it’s basically being smart. Needless to say, only the dumbest people in the crowd will think that you’re actually stupid; you’ll gain respect from everybody else by being interested in them. You’ll also gain power by collecting lots of information on everyone.

A party is an excuse for people to meet up—the setting, the theme, the music—it’s all there for people to have something to talk about. In fact, 99% of what we do or say at a party is a lame excuse. That’s what small talk and social conventions are: excuses. They give you something to say, even if it’s B.S. and everyone knows it! Don’t be afraid to approach people with a “Hi! How are you?” It will please almost everybody, even the most asocial guy sitting in the corner. Picking up something dropped by a partygoer and starting a conversation from there also works. Actually, anything will do, and people won’t mind if you use lame excuses because there’s simply nothing else to do at a party.

-Net all kinds of fish

Meeting new people is like fishing: you don’t really know what you’re gonna get. In your fishing net, you might find a gold watch or an old flip-flop shoe…or even worse. The same goes with the people you meet at a party. I recommend throwing a huge net when you fish for people; making contact with lots of people increases the odds of meeting with someone you appreciate. Also, by fishing in large volumes you don’t focus too much on one or two people, leaving the chance for making more connections.

– Thank those who reject you

– Connect people (including you)

Once again: everybody came to the party to meet people, so if you’re central in connecting people, you’ll be central at the party. Be altruistic and consider others’ interests: if you see a possible match between two people, introduce them to each other. It’s an easy way to help, and they will most certainly return the favor later on. I recommend publicly exchanging business cards and phone numbers—the more you do it, the more people are comfortable giving you their contact information.

This list could go on, but in the end only two things matter: showing genuine interest for the people you connect with, and being constantly available for new people to approach you. I could call this the “law of social attraction”; suffice it to say that it’s just common sense, and it’ll make a huge change if you apply it.

BTW, this approach works just as well if you’d like to meet people to date. The first steps you take are exactly the same, and the rest of the recipe will benefit from your own personal touch…