7 years ago, a close member of my family was diagnosed with a cancer. The surgeon operated the tumor, but for some reason, part of the removed organs got lost on their way to the lab…

In a normal case, the medical team will put the collected tissues under a microscope to identify how far the cancer has spread and determine the treatment required for the patient.

But because of the hospital’s screw-up, the regular screening procedure was no longer possible: there was nothing left to analyze and therefore no way to know what chemo was needed.

The surgeon ended up telling her she had to decide whether she wanted to receive treatment or not, I would have laughed at his ridiculous lack of professionalism if it wasn’t for a life threatening condition. In case you’re wondering where NOT to go, the hospital is this one (link in French).

So, long story short, we made a scandal and ended up meeting with the hospital’s big wig, a renown oncologist.

At some point during the interview he looked at me like you look at a frozen pizza and said something I never managed to forget (nor forgive):

“We can’t clearly diagnose how far the cancer has spread, but she has a 97% chance to survive. Now of course, if she falls in the 3 remaining percent, she’s 100% likely to die. The choice is hers to decide if she wants chemo or not.”

Put clearly: this guy didn’t know shit, wrapped up his ignorance into some statistics and let us decide on the treatment based on this rock solid information.

That meeting left me willing to pull out his venerable eyes out of their sockets and serve them as a smoothie to the surgeon.

But it also made me think:

Could it be that studies and statistics are not those objective maps of reality but just another communication tool mostly used to reassure people?

Why not just say: we don’t know?

The questions that haunt us and the sloppy statistics we’re making up to answer them, all that says a lot about our anxiety, to me, that shows our need to control the world by pretending that we understand it.

Why do we need to know?

I gather where this global obsession for statistics comes from: FEAR. Everybody’s afraid, I’m afraid, my yoga teacher is afraid, the President is afraid, I’m assuming you’re afraid too. We’re scared because there’s so much happening and we don’t control anything. And we’re afraid because we’ve been thrown in this life without a freaking clue what we’re doing here, nobody gave us a roadmap, no clear purpose, nothing, nada.

We’re afraid and we need security, that’s one of the basic requirements mentioned in Maslow’s pyramid. 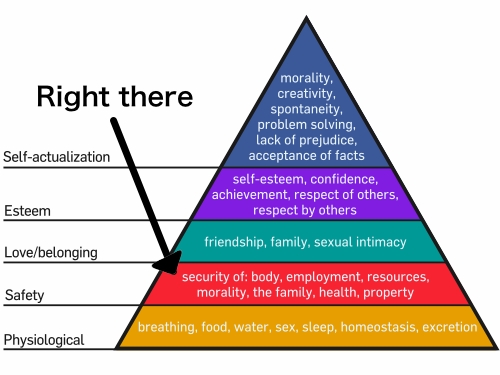 Our lizard brain won’t give us a break until a minimum level of security is provided. And statistics provide that very well, that’s why they became so popular in our ever changing environment.

Statistics lure our mind into thinking that everything is somewhat predictable but they don’t necessarily mean much, they’re just collected data that have been attributed a meaning. When that job is done by a team of marketers or scientists eager to get media attention, you can question their accuracy.

But say, assuming all published statistics are correct, do these figures really help us be happier?

Can you remember the last time you’ve used a pie chart to take action? (70% of bigger companies collect data on the internet usage trends, but only 30% do something with them).

Deep scan your memory, chances are you never used online info to actually change anything to your life, you did it because you needed reassurance, predictability and comfort.

And even that comfort is not guaranteed.

I’ve always failed at trying to reassure myself with studies and statistics. I failed miserably, checking “scientific” publications to know if I was normally endowed or below average. I’ve failed at guessing if any scientist knew what would happen to me after I die. I’ve failed, and failed and in the end I thought that maybe, if I don’t know much it’s because reality’s trying to give me a chance to be simply fallible.

Knowing that you don’t know

“The bad news is, you’re falling. There’s nothing to hang onto and no parachute. The good news is, there’s no ground.” — Trungpa Rinpoche

My Buddhist teacher is an old Tibetan Lama, and he doesn’t know much. At least he claims so. People often come to see him and ask about the future, he answer that it’s hard to tell and then gives sound advice on how to help the poor and the sick (people often get pissed when he does that).

Maybe wisdom is not about building up more knowledge?

What if the quickest path to understanding is to let go of certainty?

What can you fit in a full box?

The same goes for a mind. That’s why I love to assume that I have no idea, particularly for the things I’m suppose to master well. Being an empty box makes you available and ready to learn and create:

No one really expects you to know, and generally no one really cares either, so you appear more real and engaging if you admit that there are things you know nothing about.

Asking someone a question is actually the most efficient way to connect:

“Could you show me how to create a macro in excel?”

A question proves that you’re human and that you’re willing to be honest and learn. I always try to ask questions, it erodes my smart-ass tendencies and I make lots of friends in the process.

People that are sure of their intelligence are smelly anyway. You can’t really approach them too close without wanting to kick their gums.

I’ll finish this messy article with yet another humiliating story.

A week ago, I saw a weird looking guy show up at a Starbucks where I was writing. He seemed suspicious to me. First of all he had a beard. I don’t trust bearded guys (what the hell are they trying to hide?). He was nervous, tense, and he frowned. He left a backpack next to me and then walked away, like he was looking for something.

What if his backpack was a bomb? I was getting nervous.

“This guy might be a terrorist, we’re in the middle NYC, think about 9/11!” I’m excellent at drawing horrible scenarios.

But he came back, and helped two old men get seated, and then started working quietly.

“OK, I thought, I got a little paranoid, here, but he still looks like ass. It’s a good think he’s kind, because frankly, I wouldn’t have a face to face with that dude”.

Big nose, cracked and dirty skin, not the type from whom you would buy a used car. Then his girlfriend showed up, a cute chick maybe half his age.

What did I know? That’s the humbling truth, and I hope reality proves me wrong whenever I get prejudiced, like I did in this cafe. With a guy I saw for the first time.

I don’t know, I don’t think any of us humans really do, and our final destination is top-secret but it sounds like a safe new ground for creating, growing and helping each other, doesn’t it?