Thousands of people are evolving to become urban monks.

I’m one of them, you might be one too.

In my case, I used to follow the traditional Buddhist monastic path. That was very meaningful and rich, yet, ten years down the road I came back to a regular lifestyle because something was missing.

I felt incomplete, and I also thought it was possible to bring most of the monastic positive habits down to the city.

Today I’m convinced that we need guidelines to be happier, and that we can safely re-use monastic habits to improve our urban lives.

I’ve been experimenting with this approach for 5 years, and I met many other people who did it as well.

I’ll call them urban monks and here’s what they have in common:

More particularly, these people have designed their lives around the values of Simplicity and Interdependence:

While a large part of the world’s population still daydreams about swimming pools, over-sized limos and golden toilet seats, many others have adopted another perspective: they don’t think of being rich as a goal in itself. And they don’t want to clutter their homes with more possessions either.

This kind of  attitude is based on Simplicity: the art of being happy with less.

Such a lifestyle has a sound reasoning behind it, the idea that, in order to be happy all we need is:

And it doesn’t take a lot to cover these necessities, just food, a roof, some medicine, friends and family. Add to that spirituality and a sense of contribution and you’re good to go.

According to monastic discipline, owning more than that is just toxic. Watch the Real Housewives of New Jersey to find convincing examples of how excess money can affect your brain (don’t try this at home!).

There’s no need to become a millionaire to have a healthy, balanced life, it just takes values, work and creativity.

Becoming an urban monk doesn’t imply living cheaply though, many of the urban monks I know are very well-off.

Another common feature of urban monks is their awareness of others:

Humans are social animals, we all need a tribe, familiar people to communicate with, don’t we?

And not only that, but we need nature to provide the air that we breathe, the food that we eat and the climate that sustains our life.

Because we need others, and others need us, our lives are interdependent. 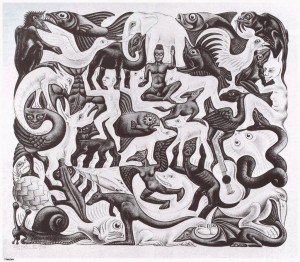 There are cruel records of how badly we depend on external resources to survive, for instance a blockade will lead a modern city to starvation in a month.

So far, the dominating model of society has put emphasis on being individualistic, competitive, powerful and unique. However, this view has proven a lamentable failure: ecological disasters and the huge rise of depression are a warning signal that we need to support and respect each other (animals included).

Since governments and corporations don’t do much to take up these challenges, individuals are now taking the lead.

Urban monks respond to global issues in accordance with the law of interdependence, they usually:

The Internet made it much easier to connect with like-minded individuals who are determined to change the way they interact and benefit from each others.

Where are they now?

They live in Europe Canada the US and all other parts of the world.

Here’s a short list of people that I identified as urban monks, you might want to look into their blogs and activities:

– Bernie Glassman connect with him on FB

– Brad Warner and his blog: http://hardcorezen.info/

– Soizic Michelot (yes, there are girls too!), you can find her here, and here

– The Urban Monk whose identity remains a secret

Feel free to connect with me if you recognize yourself in that way of life, I’d be happy to know you and share connections :)